There I was with my new friend Eli in a dark pop-up room with fabric walls twisting and tugging at a wetsuit struggling to get it around Rodrigo’s belly and shoulders. Rodrigo had just gotten to Ponto beach off a bus from South Central LA, he told me he could see shapes and colors but for the most part, was visually impaired. All three of our feet dug into the sand while we pulled his... 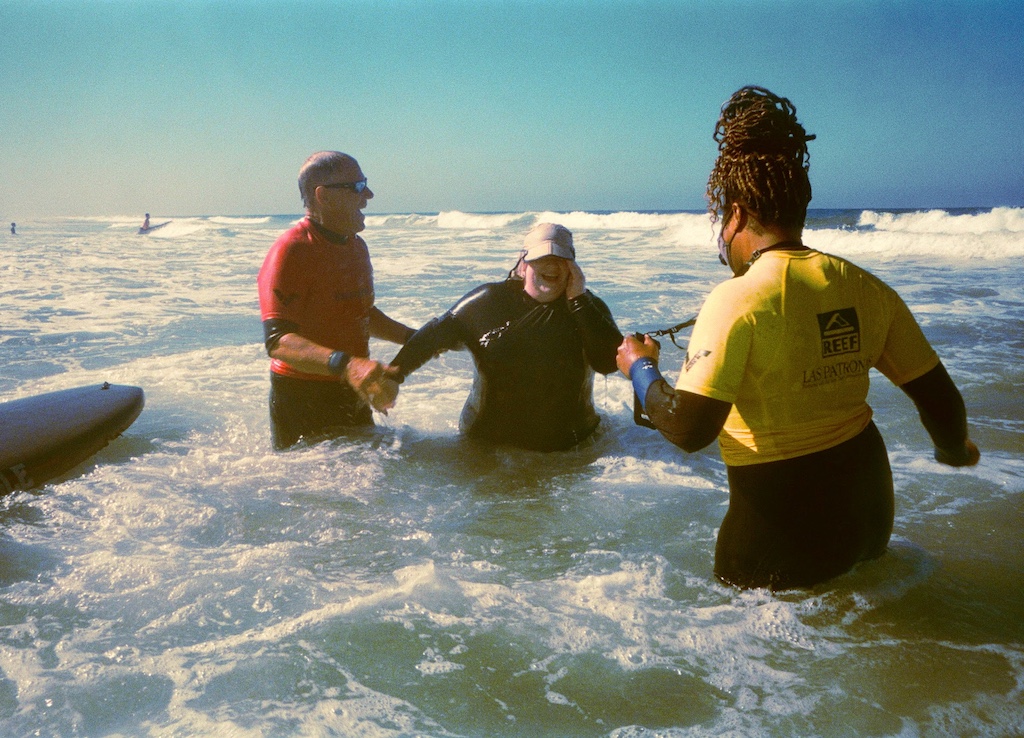 There I was with my new friend Eli in a dark pop-up room with fabric walls twisting and tugging at a wetsuit struggling to get it around Rodrigo’s belly and shoulders. Rodrigo had just gotten to Ponto beach off a bus from South Central LA, he told me he could see shapes and colors but for the most part, was visually impaired. All three of our feet dug into the sand while we pulled his wetsuit over his shoulders and zipped it up to the top of his spine. Today would be the first day Rodrigo would ever get on a surfboard.

We emerged from the room and he was immediately scooped up by a team of surf coaches. He was off and running so to speak. Everything happened so fast, I was put in a team of four with Eli: the team consists of the main rider who tows a participant out to the waves and three catchers who are ready to catch the participant when they fall.

I was receiving this training from Matthew Goodrich, a stout broad shouldered olive-skinned man with a longer beard showing patches of grey. I could tell by the cadence and confidence in his instructions that this was far from his first event. For me this was the first time I had ever coached surfing, sure I’d been out surfing with my friends through San Diego for the better part of the last decade, but coach? Let alone coaching visually impaired people, would I be able to handle that responsibility? What if someone got hurt on my watch? All of this ran through my head during the setup that morning where the Encinitas Lyons Club and Urban Surf for Kids programs came together for their annual event for the visually impaired.

I was a bit nervous, it being my first event for either organization. So I just showed up with a positive mindset and tried to make myself as useful as possible. I could tell one of the most difficult parts for the participants and the coaches are finding wetsuits and putting them on. That can cause some awkwardness but for me, I don’t mind. That’s where I found my niche, growing up in my household service was always part of my life, I don’t have any embarrassment when it comes to meeting people and just jumping in to help them. I just kept sending kids out in wetsuits to the teams at the waves.

The coaches ranged from all ages. Eli who I mentioned earlier was younger than me sporting a surfing hat with the neck cover behind it. We were a tandem for most of the day.

In a text message a month after this event Eli would tell me that he was in awe of the individuals who surfed that day. Their boldness, trust, and willingness to venture out into something unknown. It made him think about how he should handle the unknown things in his life. Uncertainty.

Once we were done putting a ton of kids in wetsuits it was time for us to get in the water!

It seems that there were too many surfers for coaching teams causing a bottleneck and long wait times so when Eli and I arrived we grabbed extra coaches from teams that had excess and made a ragtag group. We went to the group of kids and I noticed a little girl pouting so I walked over just to introduce myself and gauge the situation. By the time I took three steps her teacher firmly told me “We have been waiting for almost an hour and we still haven’t gotten anyone to take Elena out.” I apologized and said hold up one moment and wrangled our team together to take her out. I heard a voice yell “HAS ANYONE STOOD UP YET?!”, I turned around and it was Elena. She was visually frustrated that she hadn’t gone out yet, “I just want to get out there, I surf with my coach all the time!” My eyebrows perked up. I thought ok let’s do this. We got the board ready and waded into the water. I kept giving her positive affirmations like “This is fun, we got you, you’re 100% safe.” I would count down the waves coming so she could brace for impact “3,2,1.” Once we got past the break we timed a wave and I pushed Elena into a soft 4-foot wave with some push. She rode it better than I had ridden a wave in my entire life taking a smooth left turn all the way into the shore. I don’t think any of us expected her to shred like that.

She rode about 3 or 4 waves masterfully. I honestly forgot that Elena can’t see and I had a moment out in the water that brought me to tears.

I looked around and pondered how much the ocean’s vastness scares me. How could this little girl who can’t see be brave enough to come out here regularly? I collected myself and saw the rest of my team celebrating on the shore with Elena. Through the see of high fives we needed to keep on working, there was a line of kids all needing some time out in the ocean. We were out there all day and it went by so quickly. After some reflection I have realized that this event wasn’t about surfing, wasn’t about the ocean, but it was about instilling confidence in someone with love and care. 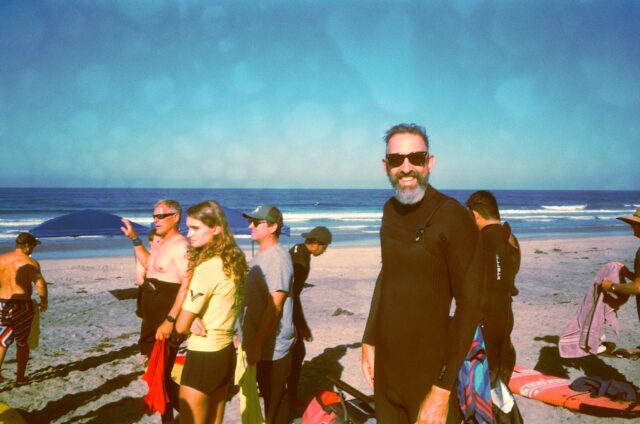 After things had settled down I was sitting on the beach with Elena and she told me “I bet you wouldn’t go out there with a blindfold!” I quickly replied and said, “No I wouldn’t, that’s crazy!”

Yea I brushed it off with a joke that we both giggled at but in truth, I wouldn’t go out there with a blindfold. I would be too scared.

After realizing that fact my respect and adoration for these kids grew exponentially because surfing to me showed just a glimpse of the challenges that they face daily. I think that gets lost to people that don’t have a physical impairment just how difficult everyday life has to be, let alone an advanced physical skill like surfing. Since the event, I spoke with Elena and she told me “I had a lot of fun surfing. I enjoyed the instructors she had also. I love the way the wave feels when you are riding it all the way to the shore. It is so peaceful waiting for the waves and listening to them.”

I and some new friends from all different walks of life spent the rest of the day on the beach eating cheeseburgers and chips in the sun. For those few hours, I truly got to be a kid again, it was a good day.

It may sound cliche but give back to a community like that helped me in ways I can’t describe in just the necessity to be humble and ask for help when things get too challenging for you.

After the event, I took some time to talk to Program Coordinator Amy Lin and Lead Water Instructor Matthew Goodrich

J-Walk: “Amy, what stood out for you in the event for the visually impaired ?”

Amy: “At the Visually Impaired Surf Therapy Surf Camp, I realized how inaccessible surfing is for those with impairments. With rip currents, undertows, rip tides, creatures in the water, and other surfers, surfing can be a very dangerous sport. As the Program and Operations Manager, I like to call participants before the event to see if they have any questions, concerns, or things I should take note of. While chatting with participants, I learned that a majority of the participants were commuting from throughout California or other states! For most of them, the possibility of surfing was a foreign concept. With visual impairments that ranged from blurred vision to total loss of eyesight, a majority of our participants didn’t think they’d ever be able to participate in watersports or step into the ocean. This annual event is marked on their calendars well in advance every year and I am so grateful that Urban Surf 4 Kids and Encinitas Lions Club can provide it for them.”

J-Walk: “Matthew, can you describe Urban Surf 4 Kids in one word?”

Matthew: “It would have to be hope. While our programs can have life-altering impacts on our kids I don’t see what we’re doing as changing someone’s life directly, but much more powerfully giving them hope. Letting them see that there are so many possibilities for what their life could and can be is foundational to enriching their lives moving forward. When we provide access to the vast majesty of the Pacific Ocean to a child that has never been in it and then teaches them to surf it gives them a sense of accomplishment that they can reflect on for the rest of their lives as an ‘I can’ moment. The joy is so contagious and the smiles stretch ear to ear and I know that that can last a lifetime.”

“Our mentorship programs provide the consistency that allows for our kids to regularly interact with a group of mentors and in a fun setting that can lead to transformative relationship building within the group.”

J-Walk: “Amy, what does Urban Surf for kids mean to you?”

Amy: “I was 20 years old when I volunteered with Urban for my first time in 2019, and that first time was enough to keep me coming back. I saw pure happiness from kids that have endured so much in the little time they’ve had on this earth. Driving home after the surf therapy camp, I thought about the famous quote by Ayesha Siddiqi, “Be the person you needed when you were younger.”

“Coming from a broken household in Sacramento, my adolescent years were filled with pain, sadness, bitterness, and constant thoughts of suicide. Growing up with parents who didn’t want to be involved in my life, I spent the majority of my childhood just sitting around in our tiny living room due to a lack of transportation, money, and resources. My only opportunities to experience the outdoors or recreational activities were through school field trips or the kindness of friends who knew what my home situation was like. I was 16 years old when I stepped into the ocean for the first time and was instantly hooked.”

“That first time I volunteered with Urban Surf 4 Kids as an in-water volunteer, I was absolutely blown away by the kindness and love that everyone had to offer. It didn’t matter who you were or what zip code you were from. For the first time in my life, I felt like I was finally part of a family- or ‘Ohana’, as we like to say.”

Deathloop In Review A Lapse Between Players and Critics

Dune: A Love Letter to the Movie Theater 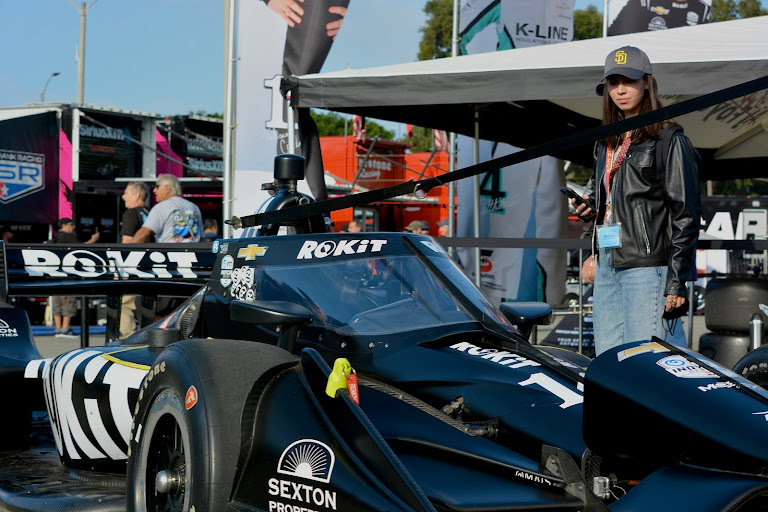