As I sit here typing, my hands ache, withered. Sleep deprived, my head feels heavy. When I close my eyes I see blue and purple particles of light flowing through the black. When I dream, it is me picking up little green vials of health at warp speed. I think I am officially in the time loop that is “Returnal.” Yet there’s a wry smile on my face peaking through this exhaustion, as I just... 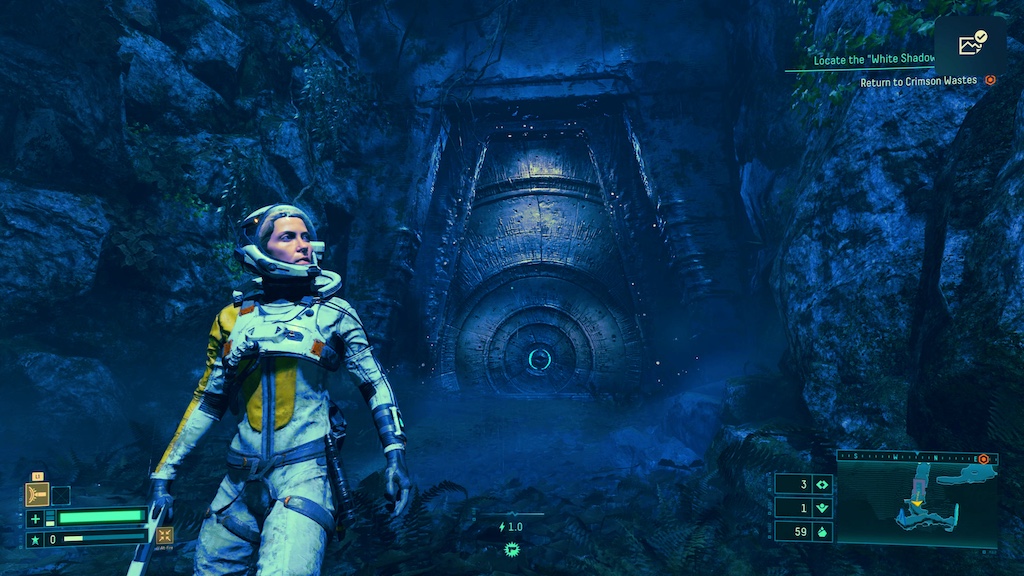 As I sit here typing, my hands ache, withered. Sleep deprived, my head feels heavy. When I close my eyes I see blue and purple particles of light flowing through the black. When I dream, it is me picking up little green vials of health at warp speed. I think I am officially in the time loop that is “Returnal.” Yet there’s a wry smile on my face peaking through this exhaustion, as I just beat the third boss and it only took me about a full work week to do it!   Was it worth the madness? Absolutely.

Returnal is PlayStation’s latest exclusive AAA title developed by indie darling Housemarque. The Finland-based company has had success with titles such as Resogun, Nex Machina, and Super Stardust HD to name a few. In 2021 they get their chance on the main stage with a big-budget title. It’s a rougelike third-person shooter that will punish you at every corner. This is not for the casual player. Returnal is indeed a gamer’s game. It is an experience where death and failure must be embraced. Progress is time consuming and hard to come by. It is your mindset that will get you through one of the most difficult and engaging games on the market right now.

If you aren’t familiar with the rougelike genre, it is one that resembles elements of the 1980 classic, “Rogue.” The main thing you need to be aware of is that when you die, you will return to the beginning of the game. I got a nice kick reading some user reviews on Metacritic about how shocked people were that they just paid $70 for a game that “makes you start over when dying.” That’s the point! Every moment counts. Also, who buys a day one release without doing the slightest amount of research? But maybe that’s why you’re here? While the rougelike genre isn’t for everyone, it is a thrilling competitive style that keeps you fully engaged, because you know that one wrong move could send you right back to the beginning. The stakes are elevated to the max, and it makes every run incredibly immersive. 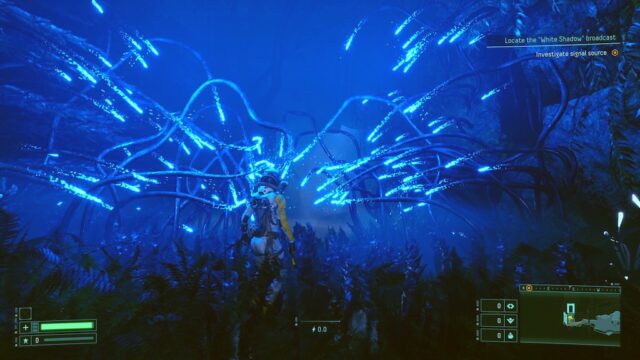 Adding to the immersion is the fantastic use of the new Duel Sense controller. The mysterious sci-fi atmosphere is dripping with style. When you first step out of your crashed spacecraft Helios, you will feel the beads of rain in the form of haptic feedback on your controller. To aim one of the many weapons you’ll find across the various biomes, you hold L2 halfway down and fire with R2. You have an alt-fire option that requires a cool down after fully pressing in L2, and there’s an overload mechanism that will allow you to reload faster if timed just right. I can’t fully express how satisfying the mechanics of the controller feel in your hand. The action is some of the smoothest flowing game play out there, and it’s all happening at breakneck speed. Your brain itself may feel like a computer after sprinting, dashing, and firing away at the onslaught of merciless enemies aiming to take you down. Combat is stitched seamlessly together and is up there with the best of the best, forming the foundation for a truly addictive experience.

In contrast, Returnal’s story is a slow burn. It puts you in the shoes of Selene Vassos, an astronaut trapped in a time loop on a strange alien planet, Atropos. She is seeking some kind of answer here, despite the warning not to come. Through exploration and death, you begin to uncover more and more of the mystery. Most of it feels like a psychological thriller as you are putting the pieces together with Selene along the way. Her memories can’t be trusted. There are elements of horror and Greek mythology mixed in as well, with some occasional first person perspectives. The creators have done a remarkable job of putting you into the character’s shoes. Seeing Selene hunched over in agony and deep relief after defeating a boss was an instant reflection of how I actually felt sitting on my sofa in the safety of my home. Director Greg Louden says it’s ultimately a story of self discovery. 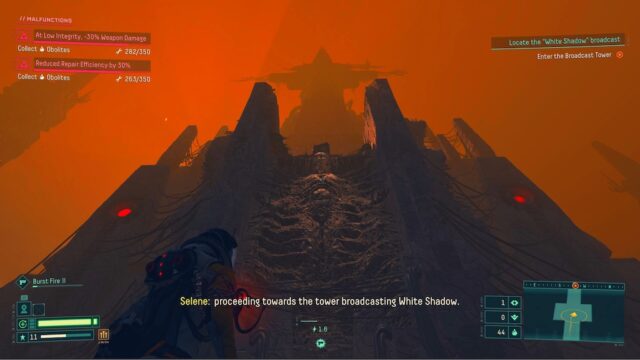 Beyond the story and the hyper-speed action, the intelligence and depth of Returnal starts to shine in the form of choice. In each run you will be presented with some difficult options. There are parasites that you can pick up that will give you a benefit, but also harm you in another way. Some stones will grant you currency, but produce a malfunction such as reducing your cool down time. Along the way you’ll find fabricators, places to spend your coin to improve things such as weapon proficiency, protection, or to buy helpful artifacts that may give you a second chance when dying. Adrenaline builds on kills improving your damage, and resets after being hit. From run to run, Returnal doesn’t let you keep many items along the way, but it makes the ones you do keep all the more valuable. The way in which all of these scenarios stack up and intertwine with each other creates a unique play through on each run, keeping things fresh. The gambling aspect keeps you on your toes. Even entering one more door to try to build your character up instead of fast-traveling to the next biome is a gamble. There is much choice in the hands of the player, however Returnal does not take it easy on you. An ill-timed risk may prove costly. Things can go from good to bad extremely quickly as just a few hits can take you out. Health is few and far between. You may even find yourself falling off a cliff or into a deadly pool, ending your own life because you simply weren’t looking in front of you. Not that I’ve ever done that…cough. 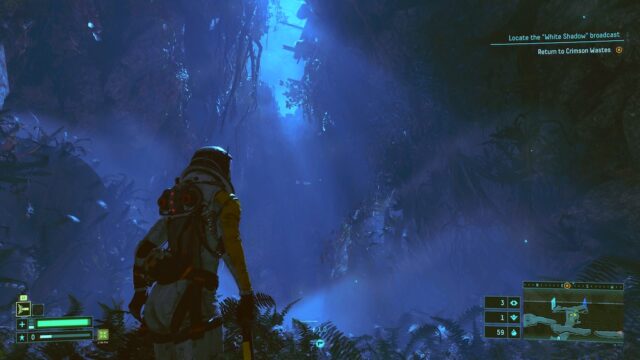 Death is simply devastating in Returnal. The will to survive and persevere through numerous failures can only be paralleled to life itself. There is something inherently human about the fight for your virtual life on this alien planet. Luckily when you defeat a boss you don’t have to face them again. Runs can add up to multiple hours, and a single mistake may send you right back to the crash site of your ship. Also, did I mention there is no way to save the game? The only time it saves is when you die. Your ship logs your stats, and new daily competitive challenges can be accessed from here.

I feel a save system such as the one in Hades should be implemented, allowing you to start from where you left off, in case, let’s say you have to do anything other than play this game all day. I’ve had just one crash, but it was frustrating to lose progress. As of now, putting your PS5 into rest mode is the only way to take a break, and that comes with the consequence of not being able to use it for anything else. While this hasn’t been a major issue for me, I don’t see how an auto- save feature would take anything away from the game.

Graphically, I don’t think the game is in the top tier of titles such as The Last of Us 2 or Ghost of Tsushima (PS4), but it is gorgeous in its own right and utilizes the power of the new system, operating at a smooth 60fps in 4k with ray tracing. This is quite a technical marvel even if the resolution is upscaled. There is very little frame rate drop for such a fast-paced game. Another unique feature is that there’s no loading screens throughout the entire game creating a smooth immersive experience. It’s rare territory to see such fully fledged graphics for a rougelike, and I hope the trend continues. Orbs of light and color from enemy attacks dazzle in desolate red sand deserts and brighten dark moody forests. 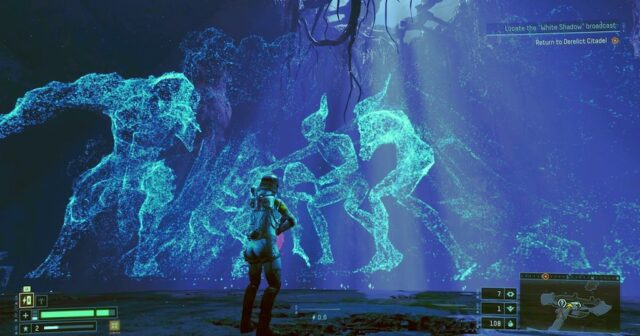 Sound design is absolutely first class. I can’t imagine a better score to capture the tension filled sci-fi atmosphere. Grab yourself a pair of 3D capable headphones and you’ll be impressed with the quality of atmosphere. I was surprised to learn that ray tracing helped accelerate the audio development. There’s a specific sound that signals your alt-fire has cooled down and is ready to trigger. It is not only practical, but a satisfying chime to your ears that will have you trained like Pavlov’s dog.

People have called for shorter run lengths and lighter difficulty options, and understandably so. However I appreciate Housemarque for not letting me off the hook easy, and I commend Sony for having the courage to support the developer’s artistic concepts. Some decisions are sure to upset fans, but art doesn’t need to appease everyone. When companies are forced to conform for the masses the medium becomes generalized. The specificity of Returnal is what makes it shine so brightly in such a daunting world. The thrill of reaching a new level is unmatched by most games out there. The present moment is where the joy of Returnal lives, because soon enough you will return to the beginning.

Other 2021 must play games: “Disco Elysium The Final Cut”