The Naughy Dog development team has a reputation of making beloved characters within superb storytelling worlds and The Last of Us  2 was no exception. Following up the success of the first installment The Last of Us made it’s sequel highly anticipated and had an extremely high bar to be met. In 2020 there was no video game that was more divisive, due to many gamers who were furious about the death of a main character... 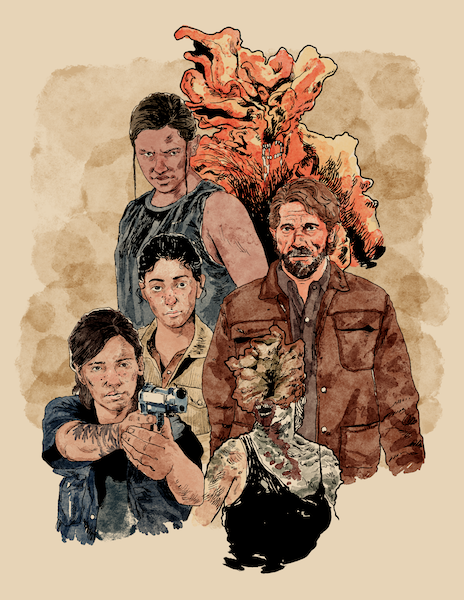 The Naughy Dog development team has a reputation of making beloved characters within superb storytelling worlds and The Last of Us  2 was no exception. Following up the success of the first installment The Last of Us made it’s sequel highly anticipated and had an extremely high bar to be met. In 2020 there was no video game that was more divisive, due to many gamers who were furious about the death of a main character from the first installment towards the beginning of the game and in my opinion didn’t give the rest of their a chance after that point. Also having a Lesbian female lead probably didn’t help in a gaming community that desperately needs to fix its image of incels, toxic masculinity, and misogyny. Personally, I believe that it was the right move to make the story less predictable and honestly realistic while being completely unique within itself. Superb Storytelling, spellbinding graphics, improved Controls, and amazingly intuitive AI make The Last of Us 2 our Game of the year.

Set in an apocalyptic zombie world where you don’t know who’s worse, the infected or the remnants of mankind? The central theme of The Last of Us franchise is survival at all costs. In the first game Ellie the child who can’t be infected by the zombie virus while carrying the antibodies is escorted by her reluctant caretaker Joel to a hospital in Salt Lake City, Utah to be studied. Once Joel finds out Ellie, who he now created a bond with, must be killed to extract the antibodies to create a cure chooses to save Ellie instead. This creates paradoxical storytelling, Joel must choose the one thing he loves in this world embodied in the innocent of a child, or possibly save mankind at her life’s expense. Flash forward a few years, Joel and Ellie both live in a commune outside of Jackson, Wyoming. Joel has served as a father figure to Ellie for the time being and through ups and downs create an unbreakable bond. That is until we meet what we think is the antagonist of the story in Abby, the daughter of one of the Doctors Joel killed to save Ellie (you don’t find this out till later in the game). Abby with the help of a group of militia men and women called the WLF (Washington Liberation Front) come to Wyoming to find Joel and kill him. Abby succeeds and gets her revenge.

At first you think this will be a tale of revenge as you and Deena (Ellie’s New Girlfriend) leave Wyoming to find Abby in Seattle Washington, the home of the WLFs. The first third of the story you play as Ellie picking off members of the militia group, fighting off the infected zombies, and searching greater Seattle for the bitch that killed your best friend Joel who I as well as many members of the gaming community have a deep conviction for. Here’s where the curveball comes in. You play the next third of the story as what you thought to be the antagonist Abby learning about her tragic backstory, gaining empathy and understanding for why she needed to kill Joel. This doesn’t happen overnight because I can attest to hating to play as her character at first but through her interactions and as her backstory developed I gained an affinity for the hated character.

Though at times this game felt clunky in the plot, the pay off at the end was well worth the pain and emotional confusion I am sure I was not alone in feeling. I loved this game because of the strong female characters and well written representation of an LGBTQ during the  complicated adolescent stage of life. This story is complex and the ability to create two heartfelt story arcs in one game is absolutely masterful.

In the world gaming every console fights to be the premiere when it comes to graphics capability and I feel Sony makes the best competition to PC in this respect. The Last of Us 2 has some of the most realistic face capturing for its characters conveying emotion in the body language and speech puts this game in a class of its own. The Landscapes cover many different types of terrain covering snow, rain, lush forests, and metropolitan cities. The Backdrops pay attention to small details creating a realism that you could get deeply immersed in. Some competitor’s graphics are so bad at points that it takes you out of the story and reminds you that you are playing a game. The smooth transitions from cutscenes into real gameplay are flawless and create an experience that you can’t pull away from.

The Improvement on animation of the infected clickers and other zombies was amazing creating deep details that made them scarier than ever. The gore is exceptional with no lack of limbs exploding, bloody deaths, and realistic damage on both ends. The close ups have minimal clipping, smooth surfaces, and details down to the way the light reflects off the blood and puss. Speaking of lighting this could be the unsung hero of the game’s design breathing life into every scene no matter the setting. Light is one of the most important aspects in creating a realistic painting and The Last of Us 2 was no different in being a complete work of art visually.

One of the cruxes of single player gaming is being at the mercy of the quality and realism of the artificial intelligence of your animated foes. This game differs from its predecessors and really focuses on the concept of sound detection giving you items to create distractions to sneak up on your enemies. You have two ways of playing aggressive where you attack head on or stealth sneaking and picking players off. I personally like both and play situationally. The diversity of foes is what sets it apart. Dealing with the infected who are mostly blind puts you in a more stealth mode while dealing with people gives you options until they add the dogs who can hunt you down by scent putting you in a continuous evasive mindset. The AI of all these characters is amazing and their reaction to  sounds and your attacks is exceptional from the way they dodge for cover, to how the infected follow the sounds of your footsteps, and how the dogs trail your scent all creating a great pace for the overall gameplay.

The way you combat these extremely smart enemies is by utilizing the amazing controls and abilities that were all upgraded in this installment. The biggest addition was the ability to lay in a prone position, you are now able to hide in tall grass and heal yourself when you are in a bad vantage point. The shooting was well improved creating realistic ballistics and damage for your enemies. The crafting in this game is more intuitive this time around and not as repetitive giving different guns unique perks including the ammo. Depending on what mode you play on,  the game is as scarce in supplies as ever and you always feel like you’re at your wits end with what you have giving the experience a sense of desperation. The excellent realism and animation of the enemies is top notch and your fighting abilities make these confrontations intensely fun every time you run across one.

The game has flaws but I feel those critics of the character choices and story direction are being nitpicky while some frankly have issues with misogynistic viewpoints. There is no way playing as a woman in a video game should affect your experience at this level especially with the caliber The Last of Us 2 is at comparative to other games in every respect. The graphics are jaw dropping at points and the details really create a world that can be immersed in over and over again. Especially since within this world are breathtakingly real enemies with some of the best AI ever created allowing the user to be involved in amazing battle situations that are unique to the apocalyptic world genre of gaming. All of that coupled with a complex storyline that blurs the lines between heroes and villains gives perspective on the world that’s been created surrounding that central theme of ultimate survival. For a video game to capture sorrow, anguish, loss, defeat, grief in light of the human condition while two unstoppable forces search for purpose in life makes The Last of Us 2 stand on a world of its own bringing excellent cinema to gaming.