The history of underground crime syndicates date as far as the bible, taking many names spanning across many different cultures and races for thousands of years. In America their stories were made famous from newspaper clippings transforming the Mafia Bosses from public nuisances to cultural legends. Throughout the years these characters were fictionalized through pulp comics, film, and television in some of the most memorable persona’s ever created. Listed will be my rankings of the... 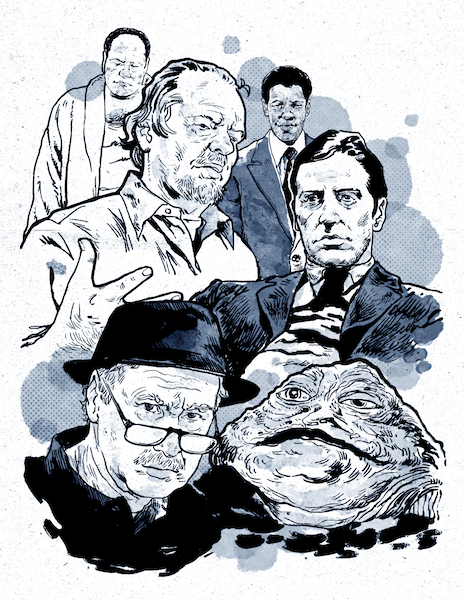 The history of underground crime syndicates date as far as the bible, taking many names spanning across many different cultures and races for thousands of years. In America their stories were made famous from newspaper clippings transforming the Mafia Bosses from public nuisances to cultural legends. Throughout the years these characters were fictionalized through pulp comics, film, and television in some of the most memorable persona’s ever created. Listed will be my rankings of the greatest Mob bosses on the following criteria: keeping code/tradition above all, secrecy, smart choices, cunning decisions, the ability to be cut throat, profitability, and their span of power or control.

Loosely based off of Atlantic City political figure Enoch Lewis “Nucky” Johnson, the fictional Thompson differs in one enormous way from all other members of this list in the fact that he was a politician and constantly in the public light. During the time of prohibition Thompson controlled one of the main routes through Atlantic City to Chicago, Philadelphia, and New York City. Nucky also ran most of Atlantic City’s underbelly giving him more power than what appeared on the surface as the City’s Treasurer. The Charming politician was loved by the public but lived a double life involving himself in heinous crimes. He is far down the list because yes Nucky is smart but he gained most of his power by keeping dark secrets, betrayal, and acquiring strength from powerful partnerships instead of from his own work or ideas.

Based off of Boston Kingpin Whity Bulger, Frank Costello is the ruthlessly violent leader of the Irish Mob. A very cunning and forward thinking mob boss that had the hindsight to groom young children to become his followers once they got old enough with undying loyalty. These minions of his would help him seize information and power from as high up as the state police. Costello has his hand in everything but his main source of income comes from drugs that have been turning South Boston inside out for decades. Costello had remained in power for generations, now working with many of his old employees’ kids and younger relatives. He is a leader that isn’t afraid to get hands dirty and kind of enjoys the violence that comes with the job. Aside from the gore he is also smart enough to engage in blue collar crimes and global espionage. His fault as a Boss would be mainly because of his extreme ruthlessness and lack of all trust. In the end of the Departed we find out that Costello is an FBI informant and that is why he has evaded the law for so long by flipping friends and enemies to stay in power.

My favorite character on the list is beloved by his fanbase for the reason he is not a fantastic Mafia boss, Tony Soprano is relatable because the show gives the viewer an inside look into his internal battles with depression and rage. Tony comes up through the ranks throughout the show to eventually become the Mafia head of the New Jersey crime family. Faults aside Tony does have amazing tactical skills foiling assassination attempts and predicting his enemys moves. He is equally cunning, evading the police as well as the FBI by being extra cautious and staying old school by keeping a low profile. Tony’s biggest fault is that his enssesient womanizing, greed, and anger make him reactionary at times to extreme levels. This puts him in avoidable situations that have him picking up the pieces and painting himself into a corner leaving him with little options to get the upper hand.

Lucas was a real Harlem drug dealer in the 1970’s that was depicted by Denzel Washington in 2007’s American Gangster that is based on his real life criminal career. Lucas represents a different era of street crime that wasn’t flashy, came up by being fierce as well as calm and collective. His business sense led him to making his greatest maneuver by cutting out all middlemen and getting his heroin directly from the source in Vietnam by hiding it right under the fed’s noses in Army planes. Lucas is eventually betrayed by his cousin who kills his girlfriend and agrees to wear a wire in return to the Police for leniency on the murder charge. Frank is arrested and eventually agrees to talk to aid the FBI by turning in his Police contacts unearthing much of the corruption throughout New York. His successes are vast for any man let alone a black man in those times but he still spoke to the authorities which is blasphemy in the crime world. In terms of Mob Boss credentials this is his greatest fault, like a captain you must go down with the ship.

In Brian Depalma’s epic we follow a young Tony Montana played by Al Pachino, a Cuban Immigrant turned Miami cocaine mogul that exudes all the great attributes of the quintessential Mafia head. What is so great about this story is the depths of Tony’s rise to power coming to this country, working as a dishwasher before he is given the opportunity to work for then Frank Lopez. The young Montana navigates the murderous streets of Miami continuing to be one step ahead from all of his foes until becoming the national cocaine kingpin after a failed assassination attempt from his then Boss Frank Lopez. Montana’s dreams of expansion show the American Dream on steroids by buying up businesses, store fronts, and real estate to hide all of his money from selling massive amounts of drugs. Eventually his hubris, anger, and drug use pitted him against his onetime biggest ally in Alejandro Sosa, the Bolivian chief cocaine supplier to Montana. Tony was flashy and believed he was invincible but in this dark world of organized crime, you live by the sword, you die by the sword.

The only non-human on the list Jabba the Hutt is the most powerful crime lord in the Star Wars Galaxy. Residing in Tatooine, a harsh desert planet in the Outer Rim, Jabba controls much of the commerce and politics of the region. Tatooine is one of the few planets that are outside of the control of the Empire throughout most of the films series creating a power vacuum that the Hutt crime family filled. Jabba’s species can live up to several hundred years meaning that his reign lasted lifetimes. He may come as a surprise on this list but I ranked him so high because of the fact that his power and reach go farther than anyone else listed. Like many of the other Mafia bosses on this list Jabba’s downfall was pride, he thought his age and wisdom would allow him to outsmart a Jedi knight. He was wrong.

The beauty of HBO’s smash hit the Wire was how it showed how everything is connected in Baltimore from the top politicians all the way to the lowest street drug dealers on the corner. Throughout the show the source of cocaine and heroin is talked about but shown or discussed concretely very seldomly. Season 2 focuses on the port of Baltimore and all of the containers that come through internationally connecting the street drugs to their foreign sources. The Greek is the most secretive Mob boss of all the discussed characters, he moves in the darkness changing his name, passport, and all around identity numerous times. His power isn’t just in Baltimore but his reach is to other countries and various parts of the world. The Greek is low profile, never taking new customers, never showing his face, never flashy and for the most part never seen or mentioned. He is never caught because no one knows who he is, possibly the most professional and resourceful Mob Boss on this list due to the fact that he’s tactical, moves in the shadows, has extreme profitably, and never slips up.

Probably the most iconic Mob boss on this list Michael is the son of Vito Corleone and took the Corleone crime family to heights it could have never seen under his father by expanding to the west coast and south to Cuba. Michael against his families wishes joined the Marines after the bombing of Pearl Harbor returning right before his father Vito’s failed assassination attemped. Michael avenges his father by killing his conspirators Sollozzo and Police Captain Mark McCluskey after Vito refused to enter the drug trade with Sollozzo. Michael was ruthless and tactical in his infamous baptism massacre power grab killing all of his enemies on the same day while having a concrete alibi. He moves the family to Nevada becoming the most powerful Mafia Godfather in the United States while expanding his reach to Cuba partnering with Fulgencia Batista (Cuban crime boss) allowing them to operate casinos on the island. Micheal is smart, methodical, cunning, and willing to kill his own brother because of betrayal. The Family is above everything, honor and tradition that date back to the old country are still prevalent in the way he does business allowing him to become one of the most powerful men in the United States.